What is it that is impossible with man, but possible with God? What can we not do that only God can do for us? 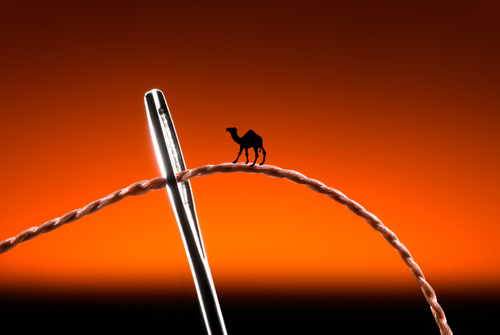 In the Gospel of Mark, we read the story of the rich young man who came to Jesus and asked him what he must do to inherit eternal life. (Mark 10:17) After a brief discussion about the law and keeping its commandments, Jesus said to him, “One thing you lack: go and sell all you possess and give to the poor, and you will have treasure in heaven; and come, follow Me.” (Mark 10:21)

The rich young ruler went away saddened and grieving. (Mark 10:22)

Obviously, the rich young man found the instruction very difficult. He was evidently hoping for a different answer. He claimed to have kept the commandments of God from an early age, but Jesus brushed his boasting aside and dashed his hopes by demanding the “impossible” from him.

Jesus turned to his disciples as the example for what he was about to say was walking away, and commented, “How hard it will be for those who are wealthy to enter the Kingdom of God!” (Mark 10:23)

They were hard words for the disciples also. Though they had left everything to follow Jesus, they were still “amazed” at what Jesus just said. (Mark 10:24)

As if the example wasn’t enough, Jesus said it again, “[H]ow hard it is to enter the kingdom of God!” and he added a word picture for emphasis:

“It is easier for a camel to go through the eye of a needle than for a rich man to enter the kingdom of God.” (Mark 10:25)

At these words, the disciples were not just amazed; they were “astonished”, asking, “Then who can be saved?” (Mark 10:26)

I believe they identified with the rich young man. I suspect they knew they had to more to give than what they had given. They might have also been thinking about the size of this following to which they had given themselves – it would be small indeed! Who could even qualify?!

In the context of the rich young man and the camel through the eye of the needle, in response to the amazement and astonishment of the disciples, Jesus followed with these curious words:

“With people it is impossible, but not with God; for all things are possible with God.” (Mark 10:27)

Have you ever wondered about his response here?

A camel through the eye of a needle is a physical impossibility. It doesn’t take much imagination to understand that Jesus is saying a wealthy person can’t enter the kingdom of heaven.

Surely, though, the rich young man could have sold all he had, given it to the poor and followed Jesus. In this sense, he could have done what Jesus asked. It was possible. That he didn’t do it is beside the point. He could have done it – unlike the example of the camel through the eye of a needle. That was impossible!

Why would he use the example of a physical impossibility to compare it to a very difficult instruction, but one that is still possible to accomplish?

In a seemingly unconnected story, a man comes to Jesus and explains that his son has been possessed by a spirit since childhood that makes him mute, throws him to the ground and causes him to stiffen, foam at the mouth and grind his teeth. Today, we might call this boy’s condition epilepsy. (Mark 9:15-22)

After explaining the situation, the man asked, “[I]f you can do anything, take pity on us and help us!” (Mark 9:22)

This is where the famous words were said: “I do believe; help my unbelief.” (Mark 9:24)

The connection between these stories is the impossible. All things are possible for God – from salvation for even a rich man to healing a boy with epilepsy – God can accomplish things that are spiritually and the physically impossible for us.

Digging a little deeper, what is it that is impossible with man, but possible with God? What can we not do that only God can do for us?

Aside from the miracle of physical healing, which is only temporary by the way, the answer is salvation. I have no doubt that the young boy with epilepsy eventually died, but salvation is forever.

The key here is that we can’t do anything to be saved. We can’t save ourselves.

Neither the rich man nor the poor man can save himself. No one is righteous in God’s sight; not even one person. (Romans 3:20) We have all fallen short of the glory of God. (Romans 3:23)

When Jesus said, “[B]e perfect, as your heavenly Father is perfect,” (Matt. 5:48) he wasn’t just making a suggestion; he was saying that we must be perfect.

Why would he say that if it is impossible for us?

In our imperfect condition, we could not enter into a perfect heaven with a perfect God without ruining it. Even if we were able to enter heaven in our sinful condition, heaven would immediately become imperfect the moment we set foot there.

As a friend of mine has said, “A glass of lemonade with a tiny little poop in it may be 99% good, but I wouldn’t drink it!”

The truth is that we must be perfect in order to enter the Kingdom of God; otherwise our very presence would taint it. But we aren’t perfect, and we can’t make ourselves perfect.

“For by one offering He has perfected for all time those who are [being] sanctified.” (Hebrews 10:14)

I imagine a monkey thrusting his arm into a narrow place, grabbing a piece of fruit and not being able to get his arm back out with the fruit clenched in his fist.  The monkey can’t escape without letting go of the fruit. Yet he holds on.

We can’t escape this life with anything in our fists. We can’t take anything with us when we go, as they say. So why do we hold on so tightly to what we have? I have to ask this question of myself, even as I write this. Why?!

Maybe, it’s because this is all we know. We fear going without. Maybe it’s because we put so much of our hopes and desires into the things of this world. Even if we “know” that “heaven is a wonderful place”, we just can’t imagine it. We grab for what we can get, and we hold on – even to our own peril.

2 thoughts on “The Impossible Perfection of God”