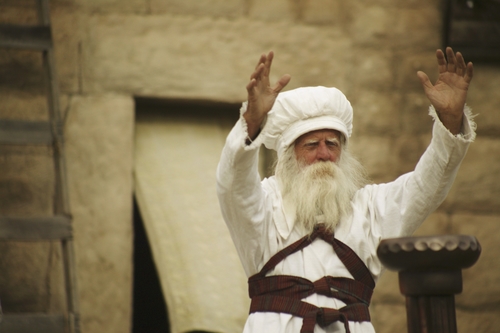 Then Pharisees and scribes came to Jesus from Jerusalem and said, “Why do your disciples break the tradition of the elders? For they do not wash their hands when they eat.” He answered them, “And why do you break the commandment of God for the sake of your tradition?  For God commanded, ‘Honor your father and your mother,’ and, ‘Whoever reviles father or mother must surely die.’  But you say, ‘If anyone tells his father or his mother, “What you would have gained from me is given to God,” he need not honor his father.’  So for the sake of your tradition you have made void the word of God.  You hypocrites! Well did Isaiah prophesy of you, when he said:   “‘This people honors me with their lips, but their heart is far from me; in vain do they worship me, teaching as doctrines the commandments of men.'” Matthew 15:1-9 ESV

Jesus leveled his criticism at people who seemed to honor God in the way they spoke and acted, but they didn’t honor God in their hearts. He quoted the prophets Isaiah and Ezekiel who carried a similar theme in their writings. The prophets were as harsh on the religious and political leaders of their day as Jesus was in his day.

The statement, “the road to hell is paved with good intentions”, seems to miss the mark in light of the importance Jesus places on the heart, does it not? Not that what we do isn’t important. It’s just that what we do starts with who we are, and who are is in our hearts.

Jesus also warned that we would know people “by their fruit”. (Matthew 7: 15-20) The fruit proceeds from the heart, which is at the root of who we are. Some people are good at appearances, but God sees the heart. God knows the fruit even though we may yet not see it. This is why Jesus said of the Pharisees, “You are like whitewashed tombs, which look beautiful on the outside but on the inside are full of the bones of the dead and everything unclean.” (Matthew 23:27)

Appearances are can be deceiving to us. We can’t always choose a book by its cover. We would probably think the Pharisees of Jesus’s day were upstanding individuals, pillars of the community and men of God. For all appearances they were.

Then there is King David, the once shepherd boy who defeated the giant, Goliath. We look at David’s life in retrospect, and have to shake our heads. David made more than his share of “mistakes”. He preyed on a neighbor’s wife, committing adultery with her, and had her husband killed to hide the deed. This isn’t the only “mistake” David made. Read his story carefully with a view toward the flaws, and you will wonder why God chose him.

Yet, David was said to be a man after God’s heart, a man who would do God’s will. (1 Samuel 13:14; Acts 13:22) We might say that “his heart was in the right place”, though his deeds sometimes strayed off the straight and narrow.

David was pretty human in that respect. We also might say he “wore his heart on his sleeve”. His wife, Michal, even despised him for it as he leapt and danced half-naked in the street as the Ark of the Covenant was being brought into Jerusalem. David’s unabashed exuberance was hardly respectable or kingly, dancing in the streets with the common people, but it was genuine.

Perhaps, God can work with a man like David who is who he is, warts and all, unassuming, lacking pretension and honestly desiring to know God. God has issues with people like the Pharisees who adopt airs and pretense and pretend to be on the outside what they are not on the inside – even, perhaps, in their attitudes toward God.

The thing is that we just don’t know. We don’t have access to peoples’ hearts, and even their appearances can be deceiving. Perhaps, from our vantage point, it’s better to be an honest liar before God than a dishonest priest.

Of course, an honest liar is an oxymoron. The terms are mutually exclusive. If a person is honest, he aren’t a liar; and if a person lies, he isn’t honest.

Some of us would like to think that priests are honest, but human nature is no respecter of persons, to turn a phrase. Priests are as capable of lying as anyone. Some people of the cynical ilk may even suspect priests of lying more than the average person just because of the prevalence of the negative aspects of human nature.

Some might say Jesus was a cynic. I would say he was a realist. More than even we know, he saw the heart. He wasn’t fooled by appearances. Because we don’t have that vantage point, we can leave the judging to God. For our own parts, we should be more mindful of God and our relation to Him. David, the very flawed man after God’s heart, reminds us in Psalm 139:

O Lord, you have searched me and known me!
You know when I sit down and when I rise up;
you discern my thoughts from afar.
You search out my path and my lying down
and are acquainted with all my ways.
Even before a word is on my tongue,
behold, O Lord, you know it altogether.

The most important thing isn’t that we are honest about our shortcomings, though any pretense we try to maintain with God is pure, unadulterated vanity – meaningless and foolish. The important thing is that we can approach God because He doesn’t reject us for our flaws. He holds David up as an example to us of a man with know pretense who dared to love God though he knew full well he was not worthy of God’s love in return.

And that is the thing: none of us are worthy. If we had to be worthy for God to accept us, we might earn God’s favor (like a worker earns his wages), but we would not have His love because love isn’t earned. God wants to grant us favor, not because we have earned it, but because He loves us. The worker doesn’t gain an inheritance; an inheritance is given to children who are loved by their father.

The truth is that we couldn’t possibly gain God’s favor by being worthy because we simply aren’t worthy. We aren’t perfect as God is perfect. We have no hope but to be loved by Him.

And the good news is this: while we are utterly unworthy, God loves us anyway:

We tend to think in terms of honest liars and dishonest priests, but God sees through to our hearts. If we give Him our hearts, that is all He wants. He wants to love us and to be loved by us. For this reason, Jesus said to the Pharisees:

“Go and learn what this means: ‘I desire mercy, and not sacrifice.’ For I came not to call the righteous, but sinners.” (Matthew 9:13)