We don’t choose our circumstances, but we can choose how we respond to them. 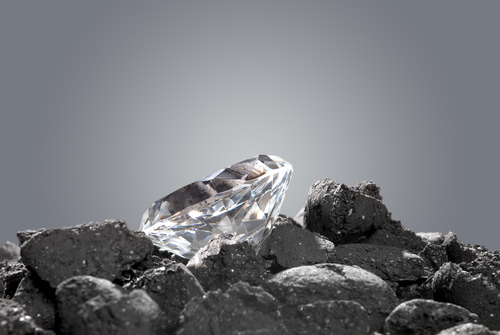 Diamonds and coal are made from the same substance, carbon.[1] They are both formed by heat and pressure, but the results are very, very different.

Diamonds on the other hand are among the hardest substances. They can be used in industrial applications for cutting metal and similar uses because they are so hard and immutable.

Coal is soft and combustible. Coal is dirty and rubs off everywhere.

Diamonds are clean, translucent, rare and beautiful. Diamonds are highly valued, while coal is something we would rather not use if we had other choices, even for burning up in a fire.

Coal is formed relatively near to the surface of the Earth, while diamonds are formed deep within the Earth. Diamonds and coal are both formed by heat and pressure. The difference is in degree.

Diamonds are subject to much greater heat and much greater pressure over a much greater length of time. Coal forms relatively more quickly under less heat and less pressure, and the result is that coal is full of impurities and still combustible.

Scientists don’t actually know exactly how diamonds are formed, but perhaps the greater heat burns away the impurities, and the greater pressure produces the hardness, resiliency, translucence and beauty.

These facts that I have taken some time to gather in relation to diamonds and coal prompt a question: Would you rather be a diamond or a lump of coal?

END_OF_DOCUMENT_TOKEN_TO_BE_REPLACED

Does God send us difficulties? If so, why?

“If I shut up the heavens so that there is no rain, or if I command the locust to devour the land, or if I send pestilence among my people….”[1]

We like to view God as a Great Benevolent Giver in the sky. We want Him to pour out good gifts to us and make our lives easy for us. We are disappointed, disillusioned and discouraged when we don’t experience the generosity we imagine and want from God.

But, this ultimate desire and purpose of God to bless us takes on a different form than we would like at times. God’s activity in our lives doesn’t always feel like a blessing.

In this verse from 2 Chronicles 7, we learn that God, Himself, may cause difficult things to happen to us. Even if He simply allows them to happen, God is ultimately responsible for them. Right?

But why? And what can we do about it?

We need to read the second half of the verse and consider the context in which it was written for a more complete picture.