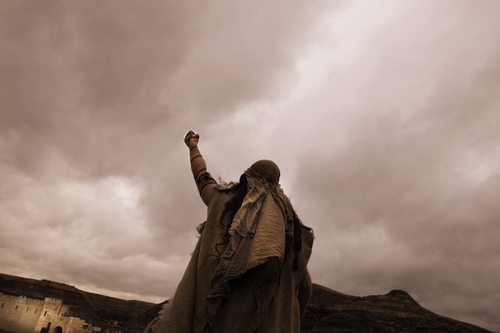 Every human being has a sense of justice that develops at a very early age. If I show a cookie to a 15-month old, and don’t give it to her, she will cry. She might not be able to articulate what she is thinking, but she reacts because “it isn’t fair”. I shouldn’t show her a cookie I’m not going to give her!

Is this a primitive form of the sense of justice that we all have? Maybe.

That sense of justice matures as we grow older. Studies show that children as young as 3 to 5 years old can already identify injustice done to others, not just themselves.[2] I think our common experience demonstrates that our sensitivity to injustice grows, develops and becomes more refined as we mature as people. We develop a sensitivity to injustices done to others, not just ourselves and the people we know.

Don’t think so? When someone from “the other party” rants about a particular injustice done to “their side”, do you feel empathetic?

On the issue of immigration, for instance, one school of thought is that we should protect the safety and privileges of the people who live in this country by limiting the number of people who are allowed to enter the country and vetting them closely. They might argue that the people here earned their right to be here. People have fought and died for the freedoms people here enjoy. Being able to enter ought to be an earned right that can’t be taken unlawfully or given to people who haven’t earned it.

Another school of thought is more welcoming of people from other countries. People who entered the country for many generations merely showed up and entered. We are a melting pot, and our values are determined by that heritage. Why shouldn’t anyone who takes the effort to come here be allowed the same access to the freedoms and wealth of this country as those who are here?

Both sides make some sense. Each side will argue they are correct. Each side is convinced of it. They might find some common ground, but they differ significantly on what justice looks like on the issue of immigration when we get into the details.

On some issues, people are in universal agreement. Killing people for fun is wrong, End of story. On other issues, people have diametrically opposed ideas, like abortion, capital punishment, etc. , and there is little middle ground.

We all have a sense of justice within us that arises before we can even articulate a cogent thought on the subject, and that sense of justice develops as we mature. When we are wrongfully accused, lied to, stolen from, or treated unfairly, our sense of justice is provoked. We don’t all have the same sensitivity for injustice done to others, especially those with whom we don’t identify, but we can identify injustice when we see it, even when we aren’t on the receiving end.

That sense of justice is universal. We act as if justice is an objective fact, even when we don’t agree on exactly what it is. When we cry, “Unfair!” our protest is intended to illicit agreement. We are appealing to everyone else’s sense of justice, and we are righteously indignant when other people don’t see it our way.

We fundamentally believe that justice is essential to civilized life, but not even the most sophisticated and studied experts on justice, the ethicists and philosophers and theologians, agree on exactly what justice means in all circumstances.

Thus, I think it’s virtually axiomatic that justice from a human perspective is subjective.

Still, we are all convinced that some objective standard of justice exists. I say that unequivocally because even the atheist Richard Dawkins, who claims that there is no God and (therefore) no absolute standard of justice, makes statements and assertions of what is right and wrong. In his book, The God Delusion[3], He even wrote his own alternatives to the Ten Commandments.

Everyone who says, “It’s not fair!” is appealing to this universal sense of justice. And not only that, they are expecting others to agree!

In the following blog post, I will explore God’s perspective, to the extent we might be able to know something about it.

[2] See Even 3-year-olds have a sense of justice by Warren Cornwall writing for ScienceMag.org June 18, 2015