God sees it all. Every thought. Every urge in the heart. Every word. Every deed…. And still He calls us. 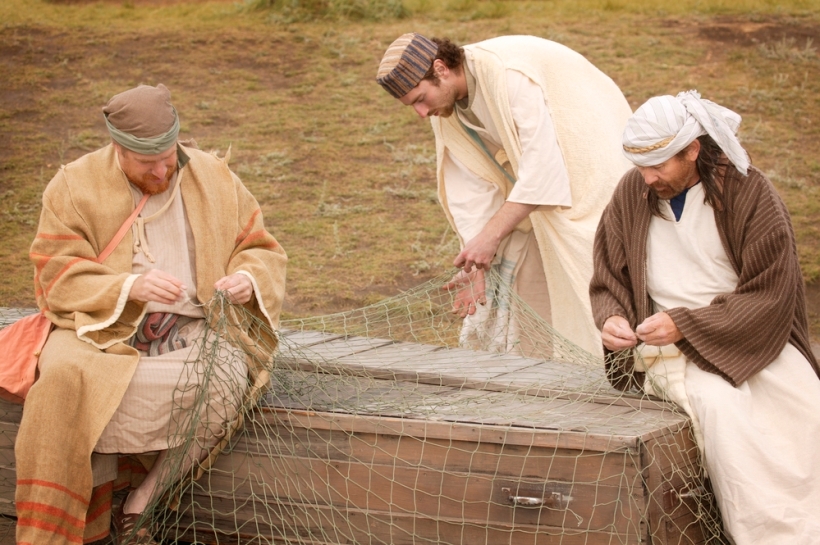 There were only three people in that inner circle: James and John, the brothers from Zebedee, and Peter, and Peter was the main spokesman of the three. Only Peter, James and John went up to the mount to witness the Transfiguration, and only Peter spoke with Jesus about it. Peter wasn’t just a spokesman; he was a leader among the followers of Jesus.

Peter was with Jesus from the beginning of his ministry to the end. He argued, legitimately, about who was best of the followers of Jesus. He boldly declared his willingness to go to prison and to die for Jesus. Of all the disciples of Jesus, Peter stood out above the rest.

So when Jesus told Peter that the rooster would not crow that day before Peter would deny him three times, Peter must have thought, “How much more can I say or do to show you that I am committed?!”

And then, Peter’s world turned upside down. The apostles didn’t understand, really, what Jesus talking about until the drama Jesus tried to explain to them unfolded right in front of them. Without warning, a crowd came walking up to them lead by Judas. The disciples reacted, ready to fight for Jesus, but Jesus stopped them from resisting, Jesus was escorted away… without a fight,. Jesus let them take him like a lamb led to its slaughter.

Imagine Peter, following at a distance, his bold bravado swept away by pained confusion and fear. “This isn’t the way this is supposed to go”, he had to be thinking. “Is this the way it all ends?” In the cloud of his confusion, pain and disillusionment, as he was standing in a crowd around a fire, a servant girl identified Peter as one of the people with Jesus, and Peter denied it.

Two more times at different intervals, Peter denied being associated with Jesus. Immediately after the third time, the rooster crowed, “[a]nd the Lord turned and looked at Peter”. At that instance, the words Jesus spoke just a short while earlier played through Peter’s head, and he “wept bitterly”.[i]

Imagine Peter as the rooster crowed and the Lord’s eyes met his…. All of his words, three years of commitment to Jesus and all the boasting about who is the greatest unraveled completely in a moment in time. Peter was undone… exposed as a fraud.

But we shouldn’t think too harshly of Peter. His experience is our experience too. “We are all infected and impure with sin. When we display our righteous deeds, they are nothing but filthy rags.” (Isaiah 64: 6 (NLT)) We boast. We think we are committed. We promise. We swear we would stick in there when the chips are down. But would we be any different?

It wasn’t the rooster’s crow that undid Peter. It was when the Lord’s eyes met his. At that moment, Peter was utterly broken and walked away weeping bitterly. Have you come to that point where you realize God sees you exposed in your utter sin?

God sees it all. Every thought. Every urge in the heart. Every word. Every deed.

We tend to think that God measures us by our guilt. We feel the weight of it. We try to deal with it, stamp it out, beat it down, cover it up. But God sees it all… and He died for us in this condition. He died for us while we were yet sinners!

God sees the beginning, middle and end. We see this in Peter’s life when we compare the first encounter to the last. Going back to the beginning:

“While Jesus was standing by the lake of Gennesaret, many people pushed to get near Him. They wanted to hear the Word of God. Jesus saw two boats on the shore. The fishermen were not there because they were washing their nets. Jesus got into a boat which belonged to Simon. Jesus asked him to push it out a little way from land. Then He sat down and taught the people from the boat.

“When He had finished speaking, He said to Simon, ‘Push out into the deep water. Let down your nets for some fish.’ Simon said to Him, ‘Teacher, we have worked all night and we have caught nothing. But because You told me to, I will let the net down.’ When they had done this, they caught so many fish, their net started to break. They called to their friends working in the other boat to come and help them. They came and both boats were so full of fish they began to sink. When Simon Peter saw it, he got down at the feet of Jesus. He said, ‘Go away from me, Lord, because I am a sinful man.’” (Luke 5:1-8)

Peter was convicted of his own sinfulness in the presence of the Lord. But still Jesus said to Peter, “Follow me, and I will make you fishers of men” (Matt. 4:19), and Peter followed.

Three years later Peter surely thought himself a different man than he was on that day when he was first called. He left everything behind for Jesus. He was all in. Certainly, Peter’s life was changed forever.

But still Peter denied that he even knew Jesus! And, devastated, Peter slunk into the shadows weeping bitterly. Completely undone, Peter went back to his previous life as a fisherman.

That’s where Jesus found Peter… again. (See John 21) Peter had fished all night but caught nothing. As day was breaking, Jesus appeared on the shore and called out to the men in the boat, asking them, “Have you caught anything?” When they said, “No”, Jesus told them to drop their nets down again, and the scene when Jesus first encountered Peter was replayed with a net bursting full of fish.

Imagine the moment when Peter realized what was happening? Peter Peter dove headlong into the water and caught up to Jesus on the shore with breakfast cooking over a fire. Peter was still impulsive and impetuous, but he really was changed.

The memories flooded back: that initial encounter when Peter realized who Jesus was, the heartfelt convicted of his sin, when Jesus called Peter away from his life as a fisherman; Peter vowing to stick with Jesus, come prison or death followed shortly by the three times that Peter denied even knowing Jesus. The tears of his weeping were dried up, but the brokenness remained.

I imagine Peter’s voice was different this time when Peter said, “Yes, Lord; you know that I love you.” Gone was the bravado and prideful boasting. Gone was any hint of self-righteous indignation. Gone was any confidence in his own determination or ability.

When Jesus asked a second time, Peter knew he deserved it. “Yes, Lord; you know that I love you,” Peter said again. What else was he to say? No one else had the words of life. Where would he go? What would he do?

When Jesus asked a third time, “Do you love me?”, Peter was grieved to the core. Any vestige of pride and confidence in his own ability was gone, replaced only by the utter realization that he was unworthy of the love and faithfulness of Jesus and utterly unable to be the person he wanted to be for Jesus.

Peter was a sinner when Jesus first called him. Any pretense that Peter was any nearer to righteousness in his own strength after following Jesus for three years came to an end around that fire. Jesus saw Peter for exactly who he was from the start. Until the Lord’s eyes met Peter’s as Peter denied Jesus the third time and the rooster crowed, Peter didn’t understand his own condition. He knew he was a sinner, but he did’t know the depths of his sin and his utter inability to change himself.

After Peter said, “I love you”, for the third time, echoing the three denials, Jesus simply said, “Follow me.”

Our pastor preached on this subject a couple of weeks ago in a series called “comeback stories”. We might consider this second offer to “follow me” a do-over. But it’s really neither of those things. What God wants is a complete make-over!

Peter was the same guy he always was after the resurrection, but something had changed. There was no pretense from Peter about his righteousness. There was no room left for bravado or pride. Peter knew the source of his salvation was nowhere inside of him.

As long as we think that the righteous things we do make us acceptable to God, we are lost. We haven’t understood the depth of our own sin and desperation. We haven’t grasped the extent of God’s grace. Jesus knew Peter was a sinner in the beginning. He saw Peter from the beginning, middle and end. Jesus always knew that.

Nothing had changed in the eyes of Jesus. For Peter the change was in the realization of God’s grace and his own utter inability to be righteous before God without it.

The conviction of sin Peter felt in the beginning, and the bitter weeping over his own failure in the end eventually became the doorway to God’s grace. God sees us for exactly who we are when He first calls us. He sees in that beginning every step we will take along way, He sees us now, and sees our future. He died while were yet sinners, and he died for us knowing what to us is future, but to Him is ever present.

His grace is greater than the past, present and future. We are wholly insufficient in ourselves, but His grace is ever sufficient for us.

2 thoughts on “When You Realize God Sees You, Exposed in Your sin”