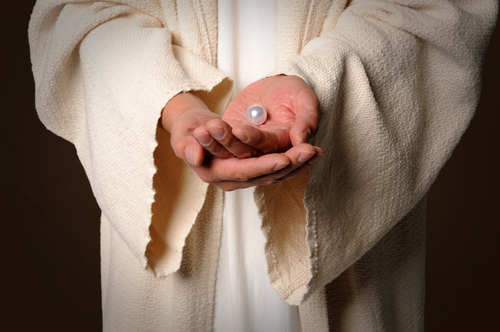 Imagine hearing these words in the First Century:

Truly, truly, I say to you, whoever believes has eternal life.  Your fathers ate the manna in the wilderness, and they died.  This is the bread that comes down from heaven, so that one may eat of it and not die.  I am the living bread that came down from heaven. If anyone eats of this bread, he will live forever. And the bread that I will give for the life of the world is my flesh.”  The Jews then disputed among themselves, saying, “How can this man give us his flesh to eat?” So Jesus said to them, “Truly, truly, I say to you, unless you eat the flesh of the Son of Man and drink his blood, you have no life in you.  Whoever feeds on my flesh and drinks my blood has eternal life, and I will raise him up on the last day.  Whoever feeds on my flesh and drinks my blood abides in me, and I in him.  As the living Father sent me, and I live because of the Father, so whoever feeds on me, he also will live because of me.  This is the bread that came down from heaven, not like the bread the fathers ate, and died. Whoever feeds on this bread will live forever.”
(John 6:47‭, ‬49‭-‬54‭, ‬56‭-‬58 ESV) (emphasis added)

The crowd asked, “How can this man give us his flesh to eat?”… and they were probably thinking, “Why would we want to it? That’s disgusting!”

To Jesus, the physical world was like one big figure of speech. He spoke about bread, and light, and salt, and a lamp, and a vine, and a mustard seed, and on and on and on. In this way, Jesus was continually challenging the people listening to him to think beyond the physical world they knew to consider spiritual truths that transcend it.

Many, like the Jews who asked how Jesus could give them his flesh to eat, had a hard time with the way Jesus spoke. Even the disciples, themselves, found these words the comparison of Jesus as living bread for people to eat hard to swallow (pun intended). (John 6:66)

Most people today, even non-Christians, understand the symbolic nature of the ritual. The physical act of eating the bread and drinking the wine, remembering the sacrifice of Christ’s body on the cross and the blood he shed for us points us to a spiritual truth – that he died for our sins; he sacrificed himself for us; we are redeemed and saved by his grace.

But it means much more than that. We are invited to partake of God’s divine life and nature. (2 Peter 1:4) We partake of the grace shown to us in Jesus, through the sacrifice he provided on the cross. (Philippians 1:7) We are partakers of the bread Jesus offered if we hold fast the beginning of our assurance firm until the end – the trust we have placed in the life Jesus offers us. (Hebrews 3:6) Iife we share in the sufferings of Jesus, we will also share in the glory of Jesus to be revealed. (1 Peter 5:1)

Jesus invites us to follow him, taking up our own crosses first. (“If anyone would come after me, let him deny himself and take up his cross and follow me.” Matthew 16:24) The cross is a metaphor, but Jesus literally lived that metaphor out, dying on a cross – not just as an example to us but literally to redeem us. So God intertwines metaphor and fact as only the very writer of history can do!

But we often stumble over the facts, like crowd that asked the question, “How can this man give us his flesh to eat?”

Jesus said unless a grain of wheat falls into the ground and dies, it remains just a single grain of wheat- a potentiality. By dying to it’s present reality, it becomes what it was meant to be, a stalk of wheat producing many grains of wheat with much greater potentiality than the single original grain. (John 12:24)

And there it is again: another figure of speech. We are compared to a grain of wheat. Lilies of the field, sparrows, pearls and the list goes on.

We can’t read the Bible, or understand it, without understanding that the Bible is often metaphoric, allegorical, figurative. Jesus was a master of figures of speech, and he borrowed liberally from the examples of everyday objects and things that were familiar to his audience to point them beyond those things to spiritual truth.

Keep in mind that Jesus was chiefly informed and influenced by the Old Testament. Of course, we believe Jesus was God who took on the form of man. He is the Word, says John, who was in the beginning, and was God, and all things were made through Him. (John 1:1-2) Jesus was the Word that became flesh and dwelt among us. (John 1:14)

The Old Testament, too, is filed with metaphoric meaning, allegorical meaning and figures of speech. We always need to be on the lookout for them, lest we miss what God may be saying through the words that the writers were inspired to record. The entire universe that God created is designed to reflect Him and His purposes for us.

It’s interesting that Jesus is called “the Word”. Of course, we are reminded that “God spoke” the creation into existence. The earliest forms of language were symbolic (pictographic). For an interesting look at the formation of early language, see Reading the Writing on the Cave Wall.