We beat the God of the Old Testament over the head with the morality of the New Testament. 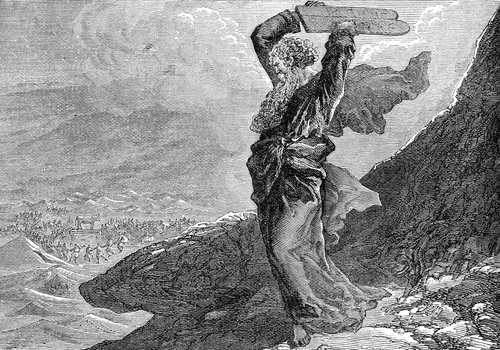 I am a fan of Perry Marshall, the author of Evolution 2.0, and a champion of the integration of science and faith. I don’t necessarily agree with him on his conclusions about evolution, but (frankly) that is only because I am not a science guy. I don’t disagree with him either. Perry Marshall, Hugh Ross of Reasons to Believe, Stephen Meyer of the Discovery Institute, and Francis Collins and BioLogos all present reasoned and evidence-based views on science and faith, as do others, and they don’t all agree.

Such is the character of being finitely human. We see in part. We know in part. We just don’t have the kind of perspective to be able to get our arms around the big picture to any degree of mathematical certainty. I enjoy reading them all, and I even listen to and read the atheists and agnostics from time to time.

One of the main objections to “the God of the Bible” is on the basis of morality, not of science. Charles Darwin and Albert Einstein both shared difficulty understanding a God who could/would allow so much pain and suffering in the world. If God is all-loving and all-powerful, what gives? So the thinking goes.

The recent post by Perry Marshall, Isn’t a Deist God a Little Less Troublesome?, deals with this issue. In the article, Perry responds to a someone who rejected Christianity on these moral grounds, but who could not get past the evidence that life could not have just happened the way it exists in the universe with such order without some Help.

This was Einstein’s struggle too. As I understand it, Einstein settled for a kind of pantheistic god: a god who is not personal, but is in, and through and co-extensive with ordered creation. Einstein saw the divine in the order of creation, but he could not equate the divine he saw with the God of the Bible. So it is with the gentlemen who posed the question to Perry Marshall, “[H]ave you ever been drawn to deism as a better explanation for the origins of life–an Intelligence…?”

Perry answered in the negative, as would I. For Perry, the answer lies in evolutionary thought, to which Perry subscribes rather whole-heartedly. He sees in the Bible, Old and New Testaments included, an evolution of human understanding. I don’t want to speak for Perry and assume what he means more specifically by that (though he links to articles that more particularly describe what he means). I will add my owns thoughts.

I don’t claim any divine revelation or unique knowledge on my part. It’s simply what makes sense to me, and, like Perry, my view is colored by my understanding and “encounters” with what I understand to be a personal God – a God who can communicate Himself to me and with whom I have some ability to gain understanding (as imperfect as it may be) .

As finite beings, how could we really know much of an infinite God unless such a God reveals himself to us?

It starts with the notion that this universe could not have possibly arisen as it has, with life balanced on a razor’s edge, without guidance. Whether that guidance is in the form of winding up the clock (or turning on the computer), as Deists might suppose, or is more personal and directed than that is the issue.

There is much that would fit into volumes to cover this issue adequately, but that isn’t my purpose in this article. I want to pick up on Perry’s observation that, before 30 AD there was no construct of human equality. The morality of the 21st century could not be possible without Jesus and Christianity introducing the idea. (There is no Greek nor Jew, no male nor female, no slave or free: we are all one (in Jesus).)

And here is the kicker: Jesus derived the morality he preached from the Old Testament. Granted, he told the religious leaders of that day, “You don’t get it. You don’t understand the point!” He challenged the religious and social and cultural views of his time, but he didn’t do it by introducing something new. He did it by shedding light on what was preserved in what we now call the Old Testament.

For all of history before 30 AD, and for many centuries afterward, might made right. People conquered and were conquered. Society was a brutal laboratory of the survival of the fittest. An eye for an eye introduced the idea of justice in place of this might makes right mentality, but it would be many years before Jesus introduced the concept of loving our neighbors as ourselves, and loving our enemies too.

We still haven’t fully embraced loving our neighbors, and we aren’t even close to embracing loving our enemies. But whose fault is that?

God created us in His image that we would have the ability to understand. He introduced Himself to people who were able and willing to grasp what He was “saying”. Slowly, over many years and many problems in the understanding, God revealed Himself. He revealed Himself, necessarily, through the cultural constructs that existed at the various times and the limited understanding that these people had.

We think that we have evolved over the years into superior beings from what we once were. To some extent, that is true. Our understanding and knowledge of the universe, God and ourselves has progressed, but we stand on the shoulders of our ancestors, and God has been working through people and in the world all along. God hasn’t changed; we have; our understanding has changed.

Like the Tower of Babel, however, we have achieved so much in the way of knowledge and technology that we think we have progressed beyond the need for God. What we know (and don’t know) doesn’t hold a candle to the knowledge of God, and we are arrogant and prideful to think that we have progressed so that we no longer need God.

In the ultimate turn of arrogance and pride, we have taken the morality that Jesus introduced, and which has been developed (painfully slowly by people who were  (and are) stubbornly resistant to understanding), and we have begun to hit God over the head with it. We now Judge “the God of the Old Testament” by the morality of Jesus. This morality was developed by Christians over many centuries, but now we claim it as our own modern invention.

And have we really come that far? More people were slaughtered in the 20th Century at the hands of atheist and totalitarian leaders than all the centuries before it combined. In many ways, the writer of Ecclesiastes is right: there is nothing new under the sun.