Faith is not blind or irrational. It is evidence based, but it does take some risk to act in hope and confidence on the evidence. 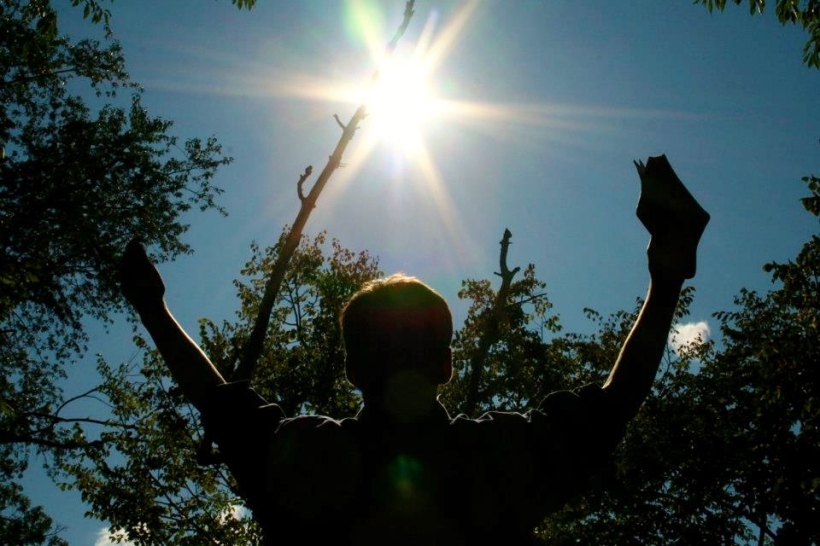 Paul said that he is not ashamed of the gospel for it is the power of God for salvation for everyone who believes. (Romans 1:16) Belief (faith), therefore, is obviously central to spiritual life in Christ.

I have not found any of these things to be the case. Faith does require a “leap”, but faith is not like jumping out over a yawning chasm. The gap is much shorter, and the landing is much more sure than one might suppose.

Consider the time in our history that the earth was believed to be flat. The most obvious evidence, what could plainly be seen, suggested the earth was, indeed flat. There was some evidence to the contrary, but it was more subtle and more difficult to fathom. The first explorers who sailed beyond the known world to prove the truth the earth was not flat placed their confidence in that subtle, less obvious evidence. They took a “leap” beyond what was known with more certainty, but they weren’t irrational.

Even after the first explorers sailed beyond what was previously believed to be the edge of the world and came back to tell of it, I am certain unbelievers remained. Skepticism is a human reaction to things that are contrary to what we have always assumed and to what we have not ourselves experienced to be true.

Faith in God starts with some expectation that God exists, like the expectation those first explorers had that the earth is not flat. It is not an expectation for which there is no evidence, but God cannot be discovered without sailing beyond the edge of our past experience and assumptions.

I find it now more unbelievable that the universe always existed without a first cause, without a Creator. Man-made things don’t just appear. Buildings have a builder. Computers, farm fields, cities, etc. are designed with intention. It’s not a great leap to believe that the world was also designed and didn’t just appear without cause.

(Who caused God is a subject I don’t address here, but it’s a good question. It deserves an answer, but I don’t have room here to provide it.)

Science confirms that the universe is astoundingly complex  with complex systems of interrelated function and form. The complexity, itself, suggests design. In fact, the complexity is so great that the plausibility of other explanations is a diminishing calculation. (See Darwin’s Doubt)  Indeed, I tend to agree that it may take more faith to be an atheist.

Yes, it takes faith to believe in a Creator, but that conclusion is consistent with the evidence we can see – subtle and nuanced though it is. The leap from that evidence to belief in a Creator is not as far as some suggest. It takes faith, also, to believe that the world came into being (or always was) without an initial, intelligent cause. We have to take a “leap” to land in either direction.

Humanity, at present, is the highest level of “thing” in the universe we know. Is there any rock, animal or other thing that can reason, create, emote, operate and live on a higher, more complex plane than human beings? Absent some other intelligence in the universe we have not yet discovered, the answer is clear.

The quality of our being that is, perhaps, most exemplary of our unique character in the universe is our level of communication that we have with each other and our level of interaction in the world with each other and everything else. Beavers make dams, but we create cities with complex infrastructure. Dolphins can communicate with other dolphins and even with humans, but humans train dolphins.

Though we are at “the top of the food chain”, we didn’t create the universe. Is it not possible – maybe even probable – that some higher Being created us? To the extent that we able to communicate at the highest level of anything we see in the universe, is it not possible that a Being even greater, who made us, might be able to communicate with us?

There is much evidence that God exists, though it may not be obvious at first blush. We have the testimonies, written and oral, ancient and modern, from people who maintain that God exists. Connecting with God may take us outside the circle of what we can see and what we have experienced in the past, but that does not mean that God does not exist. It just means that we haven’t “gone there” ourselves.

A person may even believe in God, like believing the earth is round, but that person may not have ventured out past the edge of personal knowledge and experience to confirm the roundness of the earth (or the existence of God).

It is not that much different than believing that someone exists that I have never met – someone I have only read about or someone other people told me about. The testimonies of other people give me an expectation that I will be able to communicate with the people they know, and they with me, if I ever did meet them.

If I have that someone’s contact information, I have an expectation he/she will answer the phone when I call. If I call, and there is no answer, I don’t doubt that person exists. I assume they chose not to answer or were unable to answer when I called. If I really want to make the connection, I will try again and again.

I might eventually go back to the person who provided the contact information and confirm it, but I don’t doubt their existence.

If a person has no expectation God exists, she might not even try to communicate. If there is some hope, but no confidence, the attempts to communicate might be half hearted, like an explorer who sailed far enough to lose sight of land, but turns back to familiar, safe ground.

Having faith means not only having hope, but having some confidence, or at least some courage, to sail as far as the ocean will take me. If the ocean does not take me to land on the other side of my world, am I any worse for the journey?

The testimonies recorded in the Bible are supported by substance. The substance is God responding in real and concrete ways to people. If we do not experience God in similar substance, we are fooling ourselves.

In Revelations, John had a vision in which he was told: “Behold, I stand at the door and knock. If anyone hears my voice and opens the door, I will come in to him and eat with him, and he with me.” (Rev. 3:20)

Even without the Bible, we have a sense of what love is. Love is not a coercive, one-sided action; love is two-way, reciprocal action. It makes the greatest sense to me that a God who has the power to create a universe that is as great and complex as ours would need to maintain some distance from us if He desired our love.

If such a God were to appear before us, how could we not believe? We would have no real choice but to defer to Him, cower and bend to him out of fear and terror, being wholly overwhelmed by His presence.

It makes sense to me that God preserves for us the choice to love Him. He does not knock down our doors. He desires something more than obedience out of fear. He desires to love us and for us to love Him in return.

Maybe you have preconceived ideas about God and where to find Him. Maybe you don’t really want to hear what He has to say; you might prefer autonomy over a commitment to love God. Maybe you do not really want Him messing with your life and would rather not know God (unless you want something from him). Maybe you simply have not been listening for Him knocking at your door. You might be too busy, preoccupied with your own concerns.

These and other reasons may explain why a person does not know God.

This is not an indictment or a judgment. It is simply part of the human condition. God does not make Himself obvious. We would not have the choice to love Him if He did.

God does not require a blind faith, however. There is plenty of evidence that God exists in science, in nature, and in common experience. Perhaps the best evidence, though, is the stories of people who have made the journey and can tell us from experience how it is. People who called on God, knocked on God’s door and who encountered God.

If you have a story you want to share, I would love to hear it. If you have a question someone else might be able to answer, please feel free to ask. If you are still on the shore looking at the ocean, you may be encouraged by the experience of others who have already set sail and returned to share their experiences.

I have also collected testimonies from people from all walks of life and positions in life here: Journeys of Faith