Kim Phuc saw another plane coming in low, fast and loud. She saw the bombs drop, and she froze…. 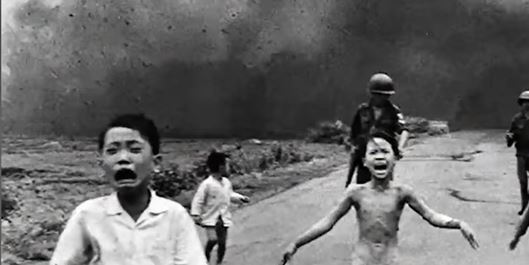 Kim grew up in a happy family that was well off and lived far from the war, or so they thought. Then, the war came to them. The villagers had taken refuge in the local temple, and the South Vietnamese Army had taken up guard to protect them.

One day, however, planes flew overhead. The first plane dropped a marker at the temple. The soldiers, knowing what that meant, screamed for everyone to run. As Kim reached the exit of the temple, she saw another plane coming in low, fast and loud. She saw the bombs drop, and she froze.

Before she knew what was happening, she was surrounded by flames. When she saw her arm on fire, she ran in panic and fear until she couldn’t run anymore.

When she stopped running, a soldier gave her water. She remembers crying, “Too hot! Too hot!” The soldier poured water on her, thinking it would ease her pain, but the water reacted with the napalm, intensifying the pain, and she passed out.

Kim suffered 3rd degree burns over a third of her body. The photographer who took the photo dropped his camera and took her to the hospital.

The hospital didn’t have enough room for her because of the number of injured from the raid on her village. She was in such bad condition they moved her to a morgue. They left her for dead to tend to the living.

Her mother and brother searched for her, found her, and carried her back to the hospital. When her father arrived, she was transferred to a burn clinic in Saigon. She was saved by her family’s determination to help her, but she would have a long, painful road ahead.

Every morning when the nurse took her to the “burn bath” to soften her dead skin to be removed, she cried through the excruciating pain until she passed out. She had a dozen laser treatments. She had eighteen surgeries. She spent years in physical and emotional pain.

Her father spent all his waking hours tending to her with a broken heart. She was in so much pain, he prayed she would die to end her misery. Her parents feared something would happen to them that would leave her alone in her pain.

She lived of course, but she was ashamed of her scars. Friends stopped wanting to be with her. Her family loved her, but she became lonely. She was no longer the beautiful, young girl she once was. She saw nothing but ugliness when she looked in the mirror.

She also lived with trauma and nightmares from her experience. She was filled with bitterness, hatred and anger. She kept asking, “Why me?!” She despaired of life. She felt like only death would give her an end to the suffering and pain.