As powerful as our telescopes are, we cannot see the end of our ever-expanding universe. Neither can we even see the beginning. 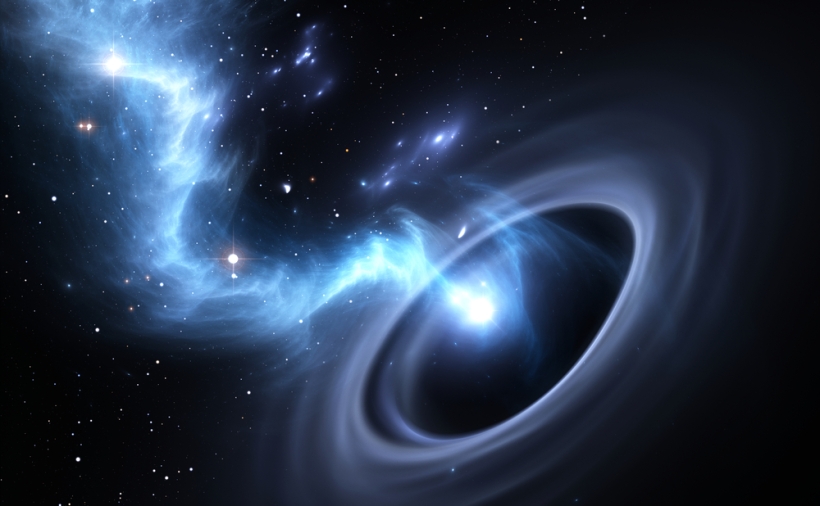 It seems that many people have this idea that God and spiritual things should be simple. They react skeptically to “complicated” responses to hard questions. When I look at the universe, though, I wonder why people think like that.

Some truths about the universe are simple. We don’t have to be rocket scientists to understand gravity. We know it when we feel it and see it. On the other hand, the computations and deeper understanding of gravity and its interrelationship with other cosmological constants is anything but simple.

Some truths about God are simple too. For instance, that God is love seems simple enough. That God created the universe is pretty simple to grasp also. Now ask, “Why is there evil in the world?”

If we take the universe as an example, however, it should be evident to us that a God who might have created the universe would be far from simple. We should not expect (or demand), therefore, that the resolution of hard questions to be simple. God must be, at least, more robust than the world created by such a God.

Our understanding of the material world has changed over the centuries. People thought that the earth was flat, that the sun rotated around the earth, that gods inhabited things like trees, mountains and storms. Until very recently, we thought the universe was past eternal.

We have always known the universe was vast from our study of the stars and planets in the sky. People had an inkling of how complex the material world is through by observing the sky. As the centuries go by, we continue to unlock mysteries about the complexity of the greater universe “out there” in space.

In the 19th century, Charles Darwin and others hit upon the idea of evolution, revealing a complex mechanism of adaptation in nature that was before then not appreciated.  The complexity in the differences between animals, even animals of similar kind, turns out to be the result of many long years of evolution that we still are not certain how it happens.

Just recently, at the Royal Society met in London to discuss “New Trends in Evolutionary Biology”[1]. The members include the most esteemed scientists in the world. The “Austrian evolutionary theorist Gurd Müller… opened the meeting by discussing several of the fundamental ‘explanatory deficits’ of ‘the modern synthesis,’ that is, textbook neo-Darwinian theory.”[2] One observer summarized the end of the conference this way: “[I]t seemed clear to many of our scientists, and others in attendance with whom they talked, that the puzzle of life’s novelties remained unsolved — if, indeed, it had been addressed at all.”[3]

The more mysteries we unlock, the greater the mysteries that are revealed. The more answers we get, the more questions arise.

Darwin conceived that evolution happened through many hundreds, thousands, and millions of random mutations occurring over extremely long periods of time. Darwin’s groundbreaking theory conceived that a process of natural selection occurred by which the mutations that provided benefit and advantage were retained resulting in changes in populations of birds, reptiles, mammals over long periods of time. All of this, Darwin believed, happened by chance – natural “selection” operating on random mutations.

I note the very word usage (“selection”) to describe the process Darwin conceived belies a more nuanced answer than he assumed. The operation of natural selection acting on random (chance) mutations is the centerpiece of Darwinian theory, but that paradigm appears to be running into dead ends. This was the subject of the last meeting of the Royal Society – a candid look at the old assumptions that seem out of joint with modern knowledge of evolutionary bio-chemistry.

Darwin thought that we would discover the transitional fossil forms that explained the Cambrian Explosion, the sudden appearance of almost every species body plan that still exists today in a relatively short period of time (too short for evolutionary processes to explain them). To the contrary, though, modern discoveries have only exasperated the Cambrian problem. Rather than exposing the transitional fossil forms, modern discoveries reveal that the gap is actually much wider than Darwin thought.[5]

Life in the material world is anything but simple. Just when we think that we have understand how things work, we discover something that is unexplainable on the paradigms that we have used. Modern discoveries uncover more mysteries. While the adaptation and change Darwin saw in the biological world is reality, the process of adaptation may no longer be explainable on the theory of natural selection operating on random mutations.

Darwin thought that the basic structure of life, living cells, was much simpler than it is.  His theory of Pangenesis to explain how changes pass down from generation to generation was “wildly wrong”. [6] None of this should diminish from the extraordinary work that Darwin did or the way that evolutionary theory has revolutionized science, but it is an example that things aren’t always as simple as they seem.

Just as our continued exploration of space has revealed planets, stars and whole galaxies in numbers that would boggle the most active imagination, we have discovered that the structure of cells, epi-genetic material, DNA, and all the world that can be viewed under the microscope (and beyond it) is far more complex than we previously imagined.

And mystery still remains. As powerful as our telescopes are, we cannot see the end of our ever-expanding universe. Neither can we even see the beginning. The beginning remains shrouded in mystery. We can look all the way back in time to a point of singularity, but we can peer no further.

On the micro-front, as powerful as our microscopes are and the technology we have to detect the smallest components of matter, we have been unable to get to the bottom of it. The micro-scale is so much smaller and more intricate than we previously imagined. We are only recently able to detect neutrinos that are so small that they can pass through our bodies without even touching another bit of matter. They can pass through the core of the Earth without colliding with anything.

If the material world is as complex as it is, how much more the spiritual world?

Yet, we bristle at the idea that something like “the problem of evil” exists. As if we are asking, “Why can’t it be simple?” We might as well ask, why the material world can’t be simpler than it is.

If we adopted the same attitude about God, the Creator of this complex world, we wouldn’t let the hard questions and difficult issues to hinder us from seeking to know and understand better as time goes on. We don’t throw out science just because it’s hard. We shouldn’t throw out philosophy or theology just because it’s hard. What in the observable universe should lead us to believe that spiritual things are so simple that we shouldn’t have to work at it?

[5] Darwin’s Doubt: The Explosive Origin of Animal Life and the Case for Intelligent Design, by Stephen C. Meyer

[6] Fantastically Wrong: What Darwin Really Screwed Up About Evolution, by Matt Simon for Wired Magazine, September 12, 2017.