I recently read a blog post by Brett Lunn, on his blog, Capturing Christianity, titled Why Everyone Should Believe that the Gospels are Reliable. If it were that easy, everyone would believe the Gospels are reliable. But, he makes some good points, and one in particular that sparked my interest.

The Gospels, of course, refer to the books we know as the Gospels according to Matthew, Mark, Luke and John. The earliest copies of those writings don’t actually contain a reference to authorship, which has occasioned a great deal of modern conjecture about who really wrote them. I say “modern conjecture” because the authorship wasn’t questioned for centuries.

In fact, the earliest charge from anyone raising a question about the authorship of the Gospels was advanced in the 4th Century by Faustus. Augustine, the great writer, thinker and theologian took on the skeptic, Faustus, with the response, “How do we know the authorship of the works of Plato, Aristotle, Cicero, Varro, and other similar writers but by the unbroken chain of evidence?”[1] With the Gospels, we have a history of acceptance that they are authentic writings of the men to whom they are ascribed all the way up to the 4th Century. That’s a pretty good chain of title.

Another criticism is that the Gospels weren’t written by the most officious people. John, of course, was a close disciple of Jesus, and so was Matthew, but Matthew was kind of suspect. He was a tax collector, and tax collectors for the Roman government were persona non gratis in the Jewish outskirts of the Roman Empire. Couldn’t a disciple with better credentials have authored a Gospel?

Mark and Luke aren’t even disciples! Luke was a companion of Paul. He wasn’t even Jewish; he was a gentile! He wrote in the Greek style of the highly educated, using Greek expressions, instead of Hebrew ones. We know him chiefly through Paul’s letters: Luke the doctor (Col. 4:14) who was the last companion to remain with Paul before his death (2 Tim. 4:10-11) among other references.

And Mark? He was a companion of Peter. He was also a companion of Paul, being described as a missionary with Barnabas and Paul (John Mark) in whose house many gathered to pray. Paul also asks for Mark to come to him in the same letter in which he laments that Luke is the only person still with him. (2 Timothy 4:11) Peter referred to Mark as his son, which most scholars take to mean a term of honor and endearment. (1 Peter 5:13)

Mark also had a falling out with Paul at some point, however. (Acts 15:36-39) Luke was a Gentile. Matthew was a despised tax collector. Couldn’t even a fledgling religion come up with credible scribes of the central story?

Sure, if Christianity was nothing but a religion concocted by the imaginations of men. Frankly, why would anyone choose this cast of characters?

I think the answer is that no one would have chosen these guys, and the story wasn’t made up. These are the men who reported what they saw, what they heard and what they knew to be true from firsthand accounts. The truth is kind of like that. It isn’t neat and clean like a story someone made up. It is what it is.

And this is the point that intrigues me by the article that inspires this piece. The author points out the great level of detail in the Gospels that are hallmarks of people reporting on what they have seen and heard but aren’t characteristic of made up stories – at least not ones that are meant to be taken as fact. The more level of detail a writing contains, the more easily falsifiable the story becomes.

Going back to the unlikely writers of the Gospels, a person making up a story would likely associate the story with the most credible sources. Instead of Matthew, Mark and Luke, we might expect gospels from more credible sources, like Peter, Thomas, Judas (not Iscariot), Philip, and even Mary. In fact, Gnostic gospels and pseudo gospels are ascribed to these people.  These writings all arose, however, in the 2nd Century or later. They couldn’t have been written by the people to whom they were ascribed, and the early church dismissed them accordingly.

Contrary to popular opinion, the canonical gospels were already well-established by the church at large well before any councils were assembled in the 3rd and 4th Centuries, and they Bible as we know it was already recognized among the scattered churches in the various regions with few exceptions as early as the 2nd Century.

But, when we compare the details in the canonical Gospels (Matthew, Mark, Luke & John) with the sparse detail in the Gnostic and pseudo gospels, the differences are glaring. The author relies on the work of Peter J. Williams in fleshing out these differences. I have reproduced the section laying out some of the differences below[2]. You can also go back and read the article that sparked my interest, and you can also watch the video of a presentation by Peter J. Williams going in to great detail on the detail of the Gospels and comparative lack thereof in the many counterfeits.

Here are some charts from Williams: [4] 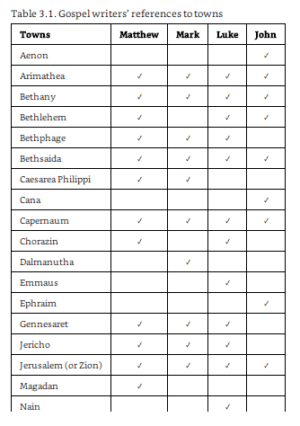 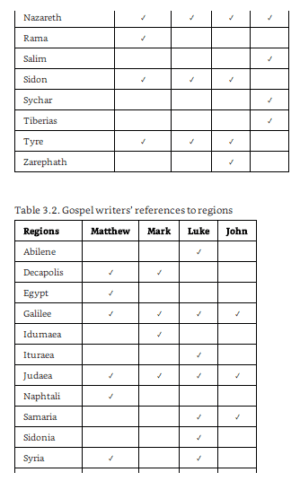 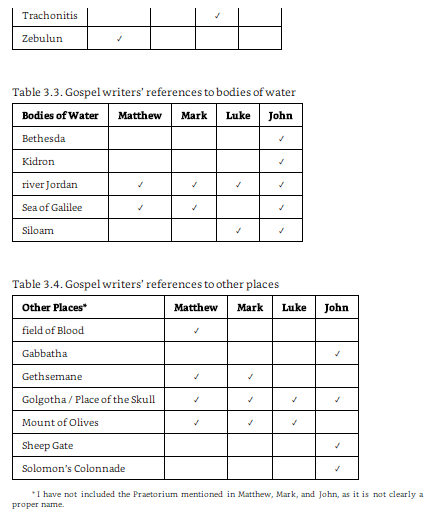 These tables show three things: (1) the writers have knowledge about a ranger of localities from well known to obscure; (2) no Gospel writer gains all of his knowledge from another because they all have unique information; and (3) the writers display knowledge about a variety of geographical information. All of this is extremely surprising if they are written well after the fact in some place outside of Palestine. As Williams says, “The four Gospels demonstrate familiarity with the geography of the places they write about.” [5] They must have received their information from experience or through listening closely to those who had such knowledge.

When Williams figures out the frequency of geographical references, the results are even more surprising. The locations mentioned per 1,000 words is as follows: Matthew = 4.905; Mark = 5.404; Luke = 5.087; and John = 4.921. [6] To wit, “The even distribution of place names in the four Gospels is unlikely to be the result of each of the four writers making a deliberate effort to spread names out, but is exactly the sort of pattern that might occur through unconsciousbehavior, recording places naturally when relevant to their stories.” [7]

Williams then looks at bodies of water, roads of travel, gardens, and more. He shows that not only are the Gospel authors accurate, but the Gospels themselves are valuable source of geographical information. This is especially obvious when you compare the four Gospels with later Gospels. There simply is no comparison.

I know you love charts, so here are a few more from Williams, who draws on the work of Richard Bauckham: [8] 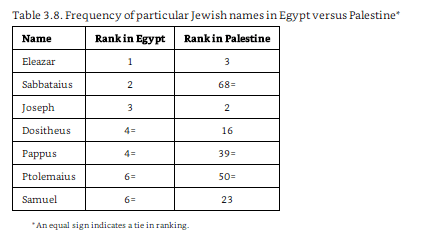 Simply put, you could not live in another part of the Roman Empire and magically come up with names that would fit Palestine during the time of Jesus.

There is further confirmation here. When a number of people share the same name a reference can be ambiguous. This is why people take on nicknames or you add a descriptor like “Mike from accounting.” What we see when we study the gospels is that disambiguators are used for the most common names, but not for the less common ones. We saw that the naming patterns fit Palestine during the first century. Not only that, “but the disambiguation patterns are such as would be necessary in Palestine, but not elsewhere.” [9] Again, we find further evidence in the way that the narrator and the characters in the narrative are distinguished by their usage of names and disambiguators and the fact that the name of Jesus sometimes needs an extra identifier. So, “[t]heir knowledge of local names reinforces this pattern of local familiarity.” [10]