God’s end game is a great multitude that no one could number, from every nation, from all tribes and peoples and languages.

I have been thinking quite a bit about diversity and the Church (universal, the body of Christ) lately. NT Wright commented recently that a modern secularist might believe that the church is catching up to the issue of racism following a largely secular cry for attention, but the truth is different from what it appears.

When asked about the church’s response to issues of race, Wright commented that God has always had a plan for the diversity of His creation. The comment got me thinking in what ways it might be true.

In fact, if we “read ahead” in the story, we see John’s great vision of “a great multitude that no one could number, from every nation, from all tribes and peoples and languages” standing before God. (Rev. 7:9)

If this is the end game, where do we find evidence of the plan of God to gather that multitude from every nation, from all the tribes and peoples and languages to Himself?

Going back to the beginning, we see that God created people in His image and urged them to be fruitful and multiply. (Gen. 1:8) It is a great Christian doctrine from this early story that God made all people in His image to fill the earth. People are unified early on, but the story begins to go awry, of course. Or does it?

From the first rebellion and “fall” to the Tower of Babel, people grew distant from God. They took things into their own hands and set themselves in opposition to God. Rather filling the earth, they settled in a plain in Shinar (Babylonia) where they sought to fulfill their own plans– “to build ourselves a city, with a tower that reaches the heavens”. (Gen. 11:1-4) 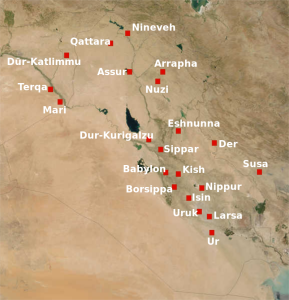 Contrast is seen in the story of Abraham from Ur (in the plains of Shinar), a man of faith willing to listen to God and believe in God’s plan. God called him to go to a foreign country that God would show him (Gen. 12:1) with the promise that his descendants would be multiplied and become a blessing to all the peoples on the earth. (Gen. 12:2-3)

In the Tower of Babel is a story, the end game of which is men seeking to live without God, constructing for themselves a monument to their own plans, establishing a unity apart from God. God scattered them, confusing their languages so they could not carry out their plans.

In Abraham was a man willing to listen to God and fulfill Gods plan. Rather than a City unified according to man’s plan in opposition to God, Abraham sought “a city with foundations, whose architect and builder is God”, unified under God’s plan. (Heb. 11:10) Abraham lived and died in the foreign country God showed him, still believing in that plan – even though he would not see its fruition.

It was God who scattered the nation’s when they unified and built a tower of Babel, but He did it in furtherance of his ultimate plan. Paul picks up this theme when he said, “[God] made from one man every nation of mankind to live on all the face of the earth, having determined allotted periods and the boundaries of their dwelling place, that they should seek God, and perhaps feel their way toward him and find him.” (Acts 17:26-27)

We know, by reading to the end, that the ultimate plan included the gathering of a great multitude from every nation, from all tribes and peoples and languages. God’s plan was to unify the diverse people of the earth as part of His great plan.

Thus, when the descendants of Abraham entered the promised land, and God told them to drive out the inhabitants, it was part of the larger plan which was eventually to bless all the nations. He had to build the foundation, first, from which He could launch that plan.

The plan included a root that would grow out of the stump of the remnant of those people. Rebellious though they were, God was tilling the soil out of which the Savior of the world would come – the great Unifier. “For [Jesus] himself is our peace, who has made us … one and has broken down in his flesh the dividing wall of hostility….” (Eph. 2:14)

NT Wright observes that we don’t see much discussion in the New Testament of race because the cradle of civilization into which Jesus was born was a crossroads for humanity. East and west, north and south, people from all over the world, every tribe and tongue, met and passed through the Levent. Greco-Roman roads led to the pathways of the outer reaches of the world. Far into the heart of Africa, far into the Orient and far into the northern reaches of Europe, and it would eventually reach to the coast lands in the far west, across the oceans.

When Paul said there was neither Greek nor Jew, free nor slave, male nor female, that we are all one in Christ (Gal. 3:28-29), he didn’t mention race because racial differences were not the issues that divided people in first century Judea.

On the day of Pentecost, the Holy Spirit came upon the followers of Christ who were gathered together in one place. They were led by God’s Spirit to go out into the city filled with people from all over the world, and God spoke through them in the tongues of all the various people so that each person heard them speaking in his own language by is Holy Spirit. (Acts 2:1-11) The antithesis to the Tower of Babel! This time orchestrated by God.

And the final message from Jesus was to send his followers into all the world (Matt. 28:19), echoing God’s instruction to Adam and Eve to be fruitful and multiply. The blessing God intends is for all the nations. God created the diversity, and God intends to bring unity out of that diversity with a multitude of people from every tribe and tongue who love Him and are called according to His purposes. (Rom. 8:28)

One thought on “God’s Plan for Unity from Diversity”

A Yorkshireman's take on life, death, and eternity